Sir Robin Knox-Johnston is the 1first man to sail solo, non-stop around the world. In April 2009 he celebrated the 40th anniversary of his return to Falmouth in Suhaili, 312 days after setting sail on a voyage no one else had ever accomplished. In 2007 he completed his second solo circumnavigation as a competitor in the VELUX 5 OCEANS race. Sir Robin is the founder/Chairman of the Clipper Round the World Yacht Race and is an inspirational figurehead to those who undertake this challenge of a lifetime.

Ten months, 35,000 miles of ocean racing and around 400 people facing the challenge of a lifetime. When the starting gun goes off for the Clipper 09-10 Round the World Yacht Race on 13 September 2009 the fleet of ten sleek, stripped down 68-foot yachts will embark on a full circumnavigation of the globe.

Setting off from the Humber on the north east coast of England, it will be almost a year before they return. Their jubilant arrival home in July 2010 will mark the end of an epic challenge: taking on the elements and becoming one of the world’s elite – a global ocean racer. Read on to find out more about the conditions they’ll face on the way and the delights of the ports they will discover en route. 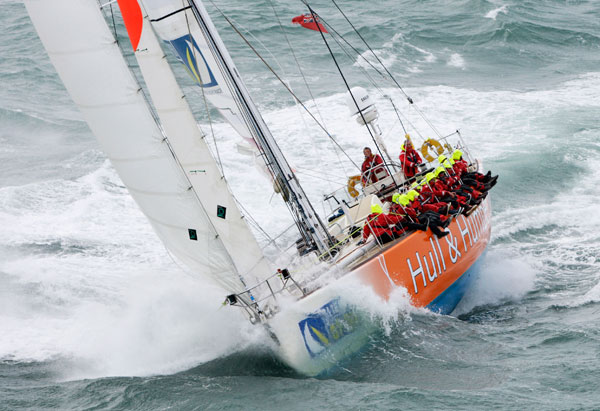 The Clipper Race is tough. It is contested by ten stripped down 68-foot racing yachts, each sponsored by an international city, region or country, and all of them crewed by people like you.

Housewives, taxi drivers, chief executives, lawyers, doctors, carpenters, truck drivers, IT specialists, marketing executives and even members of the clergy have all taken up the Clipper challenge – to race around the world under sail. It is a feat that fewer people have completed than have climbed Mount Everest.

Clipper 09-10 will be a truly international challenge. Fielding entries in the race are Hull & Humber, Uniquely Singapore, Qingdao and Jamaica Lightning BoltCape Breton Island, Cork, Team Finland and California are all new to the fleet, while Spirit of Australia embraces the whole of the land down under, the state of Western Australia having sponsored entries in the last two editions of the race. are all return entries, while

Find out more about the skippers and the people from all corners of the world who’ve signed up by visiting each team’s site here.

And if you’re inspired to give it a go yourself. click here
Est 2007